Summer is over and AMD lifted the curtain to update its FX CPU lineup yesterday. There are a couple of new parts there, plus new lower prices to entice enthusiasts to take a second look at its offerings. 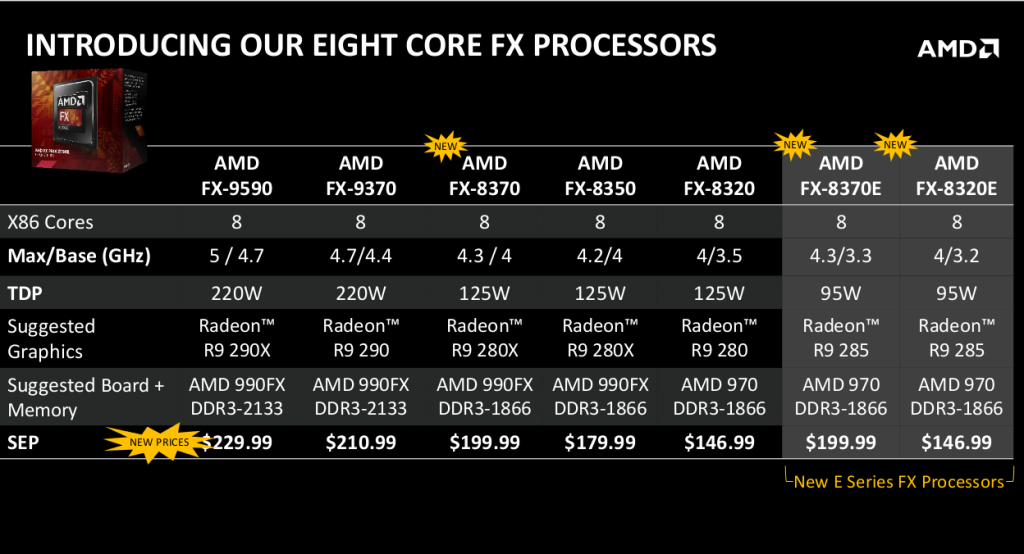 I published an article about the launch on Rage3D, which takes a look at what AMD revealed with a little more detail. In the following weeks, a followup article will be presented with benchmarks that put the FX line to the test, but until then, head over to Rage3D to read the article; here’s a short preview:

There are no newcomers in the 9000 FX series, but we do have an important change: its crown jewel, the 9590, has had its price changed to $229.99. The interesting part here is not the price change itself, but its positioning: AMD pits the FX 9590 against the i5-4690K and not against the i7 line of processors. I can already listen to fanboys crying “AMD is admitting defeat, that its processors are not as good as Intel’s” but as always, things are not as black and white as they seem. AMD’s reasoning is simple, and can be explained easily if you compare graphics cards for instance. Would you ever consider comparing a $1000 graphics card from vendor A with a $230 card from vendor B? The thought would be absurd, but it’s not deemed so when processors are concerned, just because they are the top offerings from both companies. AMD knows it can’t beat Intel on pure performance at the moment, so what they are saying is this: when you go out to buy a new processor, for a certain budget, you will receive better performance than Intel’s processors in that price range. And from the looks of it, they have the numbers to back that claim up.