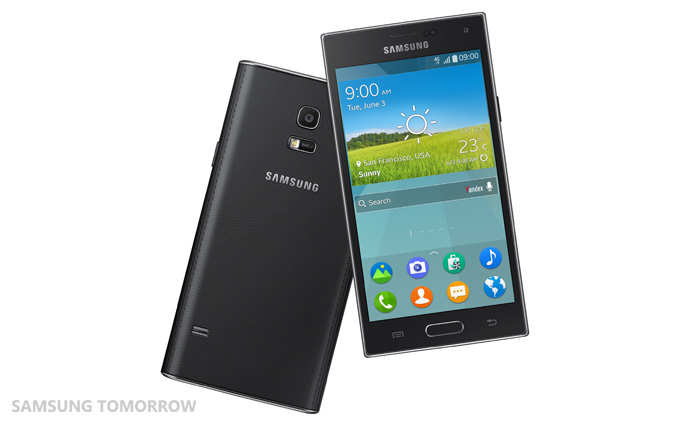 “Samsung is seeking to integrate its own components, displays, software and services. Using Android makes the firm dependent on Google, meaning its ability to differentiate its products is less strong than if it had its own operating system.” He added that “by going down the Tizen route, the risk is the firm doesn’t have enough high quality apps available to make the devices good enough for consumers.” – Ian Fogg, in an interview to BBC News
The phone design-wise is not something special, reminding us of the rest of the Galaxy line. It packs a quad-core 2.3GHz processor, 2GB of RAM and 16GB of storage. A 4.8-inch 720p Super AMOLED screen, a 8MP rear camera, 2.1MP front cam and 4G LTE connectivity completes the specifications. Samsung decided to get a feature straight from the latest Galaxy S5 and the Z includes a heart rate sensor and fingerprint scanner.

Samsung is not oblivious to that reality, of course. This week, the company will be hosting its Tizen developer conference in San Francisco, at which the Z will see its official launch. Samsung has also promised that “to encourage more developers to join, the Tizen Store will provide a special promotional program to all developers for one year”.

Details of that program are expected at the conference, where the company will hopefully also reveal pricing information for the Z. Samsung has said that the device will launch first in Russia in Q3, before rolling out to other markets.

The company gave the world its most recent taste of Tizen back at the Mobile World Congress in February, when it showed off prototypes of its devices running the OS. But while the Z is Samsung’s first smartphone featuring Tizen, it is not its first device to break free of Android. Just a few days ago, the company began rolling out an update for its Galaxy Gear watch, which replaced the Android OS with Tizen 2.2.