Braid – one of the most original games in recent years.

To be honest, it has been a while since I’ve played any game – mainly due to the fact that I got tired of them. You will of course argue that there have been many titles that deserved my attention the past year, and I fully agree. The only game that actually got some attention was NBA 2k9, and that’s because I could simply play a couple of games, leave it be for a while, and then pick it up again. It was funny, because even thought I was aware of all the new releases, I never actually played any of them; I used them for benchmarking, comparative analysis as far as IQ is concerned, but game playing? Nope. Even after I got myself lots of free time, I couldn’t find myself willing to install a game, and just play. Hence, I watched all 7 seasons of 24 in about 20 days (but that’s a different story altogether 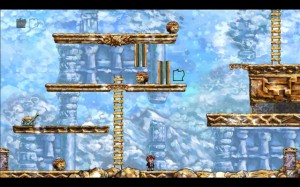 Well, a week ago I decided that this was going to change. I spoke to a dear friend of mine (and Catalyst beta tester) that I know is a game-a-holic, and asked him for suggestions. He recommended several titles, and I thought I should start with Wanted – Weapons of Fate. It seemed like a good choice, so I started playing, and I quite enjoyed it I must say. But then one day, I was browsing the Rage3D PC Gaming section, and one game was getting rave reviews : Braid. So I said, what the heck, I’ll try that one too, see if it’s any good. So I got it from Steam, and started playing. It was only when I looked at my watch and realised that 5 hours had passed, and it was 6am, that I knew this one was a true keeper.

For those of you not in the know, Braid is a platform/puzzle game. With a twist: you manipulate time. And that exact manipulation is what makes the puzzles brilliant, you have to manipulate things to your advantage, so that you can get all the map puzzle pieces. While you progress, you encounter even more complex puzzles, more time-manipulation variables (I am on World 4 right now, and when i go right, time goes by normally, when I jump, time freezes and when I go left, time rewinds; crazy

). Its graphics are excellent (you really need to see it in motion to appreciate it), and the music is also very atmospheric. Definitely one of the sleeper hits of the year, it’s getting rave reviews everywhere. So check it out and you will definitely get hooked, just like I am right now