After a few days of hard-earned vacation, Digital Lair is back with your daily dosage of news. First stop: Blizzard – the behemoth behind franchises like Diablo, Starcraft and of course Warcraft had some good news for Diablo III users.

Avid Diablo III players were waiting for patch 2.1.0 for quite some time, and it seems the release day is finally upon us. As detailed on Battle.net, the patch should arrive tomorrow, bringing many improvements and new content to the millions of players. Here’s the post:

In addition to Seasons and The Vault, another notable feature coming in patch is 2.1.0 is a system we’re calling Greater Rifts. Formerly known as Tiered Rifts, Greater Rifts are a special type of Nephalem Rift designed to measure and showcase hero progression.

Featuring a progress timer, unique rewards, and custom leaderboards, Greater Rifts are the perfect opportunity for players to see just how far they can push themselves on the battlefield—and glean some incredible treasure along the way!

To enter a Greater Rift, you must first acquire a Keystone of Trials. These keystones have a chance to drop from any normal Rift Guardian when playing in Torment difficulty on a level 70 hero.
Once you’ve acquired a Keystone of Trials, you’re ready to take on what’s known as the Realm of Trials. To access this realm, visit a Nephalem Obelisk in any town hub, right-click on the monument, and place your keystone into the appropriate slot near the top of the window. Click “Accept” and your trial will begin. Be sure to prepare your skills and gear ahead of time, because once inside the Realm of Trials, you cannot change either until the trial is over. 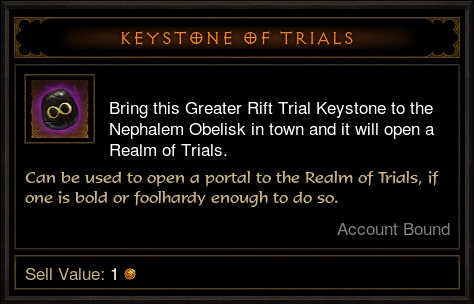 You can find the rest of the announcement and more new features over at Battle.net.