So, with the cat (or should I say Spider) out of the bag, here are my impressions of the whole thing. I believe that, what AMD presented in Warsaw is the beginning of a new way of thinking for many consumers. These days, believe it or not, consumers buy products based not how much performance they’ll get for their €. Meaning, they decide that they have, let’s say €500 to spend, and then see what’s out there that can give them more performance.

Let’s start from the foundation of the whole thing: the motherboard. AMD’s 790FX is probably one of the best motherboards out there, bar none. It’s definitely feature-packed, and it has support for several technologies that are to become mainstream soon, like PCI-e 2.0. But, the beauty of it, lies in its backwards-compatibility. So let’s just say that you have an Athlon64 X2 right now, and you want to upgrade to the latest and greatest. You also don’t have the money right now to get both a new CPU and a motherboard. What you do? Easy. You get a new AMD 790FX mobo, and you breath new life into your Athlon64. Better yet, initial testing show that this particular combination makes the Athlon64 overclock to heaven and back, with some impressive results hitting the net. Couple that with AMD Overclock, which is an excellent tool that will allow you to play and tweak at your heart’s content, and the combination is surely promising, to say the least. Plus, if you don’t want to invest in a Phenom right now, and would rather wait until AMD releases a higher-clocked version, you can. 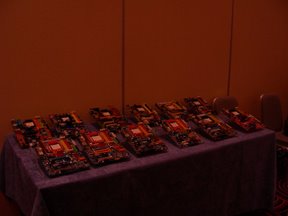 Second thing, is the processor. The Phenom is the very first true quad-core processor out there, and many were disappointed with its initial clock speeds. But, I say, just look at the big picture. Did you actually see the prices these chips were released at? Affordable quad-core for everyone – plus, together with the 790FX you have some exciting stuff like un-ganging the memory, and so on and so forth. You probably saw in the various reviews around the net that memory performance was lacking – well, the truth is that several benchmarks don’t actually recognise the Phenom’s new architecture, and they think they’re dealing with an old Athlon. Hence the low results. As for overclockability, I can only speak for the 2.4GHz Phenoms we had in Warsaw – each of them reached 2.8GHz easily, so I doubt that would be a problem. 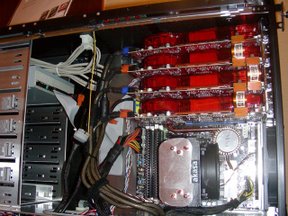 Last but not least, the HD3850/HD3870. It’s a midrange attack from AMD – these chips are cheap to produce, consume very little power and their performance/€ ratio is excellent. Plus, you get scalable Crossfire configuration with one to four cards (in the FX mobos). We had Crossfire X systems on show, which are working already, and the drivers should be released when the new year arrives. A special surprise was on show too, with a system running HD3870 X2 cards in Crossfire, showing how scalable this architecture really is.

But let’s get back to the Spider platform. The beauty of it is that these three components actually work together. Meaning you actually see performance advantages by pairing all three together. It’s the first release of its kind, and I didn’t see many reviews on the net stretching that fact. I believe when reviewers have more time on their hands with the new platform, they will appreciate its advantages. I will post some benchmarks and impressions too as soon as I get a Spider system here to play with.

You can find all the crappy pics I took here: http://picasaweb.google.com/kombatant/SpiderLaunchWarsaw2007