Intel is a powerhouse on desktop computing, but it still struggles in mobile, where ARM is the undisputed king. The company has taken several steps the past few years to compete in that arena, and its latest outing is getting near release. 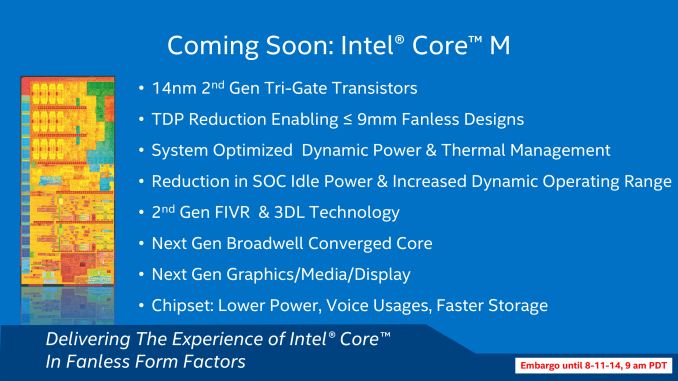 Broadwell has been much-anticipated, with several leaks already about what to expect from it, so Intel was kind enough to lift the NDA and give us a first peek at its architecture. The first big news is that the chip will be manufactured in Intel’s 14nm process node, a first for the company. In the notebook and tablet market, Broadwell will have the name “Core M” for consumers and “Broadwell-Y” for comparison charts. According to Intel, we can expect 25% smaller boards, 50% smaller CPU packaging and a educed power draw of 60% when the SoC is idle, while improving TDP efficiency twofold. It will also have the usual support for DirectX 11.2 and OpenCL 2.0.

Don’t forget that Broadwell is a “tick” in Intel’s architecture, which simply means that it’s a refined Haswell. Hence the minimal increases in CPU speed (we can expect small improvements of 5% in the Instruction Per Cycle rate) – but that is not the focus here. Intel says Broadwell’s GPU can push out 20 percent more compute power and 50 percent higher sampling than Haswell, plus bear in mind that speed was never Intel’s problem in the mobile space. Making the x86 core a viable option in the mobility space is, and Intel is working towards that goal for quite a while now.

More information on Broadwell is expected at IDF San Francisco next month. The IFA consumer electronics show in Berlin, occurring a week earlier, should feature the first Core M sporting products. The first devices sporting Broadwell will be available for the holiday season, with broader OEM availability in early 2015.